Malaysia, has a very conducive environment for agriculture. Six percent of the population are employed to some of the agriculture activities making agriculture the most curtail industry in Malaysia. Hence, there is a need to develop the agricultural facilities by incorporating latest technological advancements. Conventional seeding process is time consuming and requires additional labor cost. In this paper, an automated system is proposed for seeding as well as irrigation process in agriculture which reduces the labor cost. This system aims to increase the efficiency of the seeding process without affecting the nature of soil. The proposed system is equipped with Arduino MEGA and Arduino UNO which acts as the main control unit while ultrasonic and soil moisture sensors are used to detect the obstacles and soil moisture level, respectively. The robot consists of a funnel like arrangement to perform the seeding procedure. The field is equipped with moisture sensors placed at different areas that monitors the moisture level of the soil on a regular interval for irrigation purposes. The proposed system will be of great benefit to the future endeavor of agricultural business as well as it will be able to optimize the seeding and irrigation.

Agriculture is the oldest and yet an important economic activity for any given country. There are distinct available types of machines for harvesting, ploughing, pesticide control, etc. Most of these machines are manually operated to execute the required action. Different machines are used to perform separate action which leads to lower profit returns [1]. Seeding is a tedious yet a crucial activity for a farmer. Seeding of a large farmland is even more tedious, which demands for big group of personnel for manual seeding. To minimize the personnel required for seeding, harvesting etc., agriculture machineries were developed. Planting of seeds manually, leads to low spacing efficiency and seed placement, serious health issues and tedious task [2]. Ideal solution to overcome the deficiencies discussed above is by developing a machine that carries out more than one action and by atomization of the developed machine, which will lead to intensification of the yield.

The primary aim of this paper is to design and develop an efficient seeding and irrigation system. This system consists of an Arduino MEGA, Arduino UNO, ultrasonic sensors, DC motor, servo motors and moisture sensors. The scissor lift is designed using Fusion 360 and 3D printed. Arduino MEGA and UNO holds all the commands, receive all the parameters from the sensors and send output signals accordingly. The ultrasonic sensors will be used for the object detection and moisture and DHT 22 sensor will continuously monitor the moisture of the soil, humidity and temperature of the surroundings on a regular interval and alerts the monitoring system.

Aravind Kumar et al. [3] have proposed a machine for seeding and irrigation to limit the working expense and decrease the ideal opportunity for planting seed and irrigation operations by using solar energy to operate the system. There is a sharp pointed iron attached to the front of the robot to dig the soil for seed sowing, once the seed is planted the supporter at the back end of the robot covers the dug land with soil. Versatile computerized water system robot was built to irrigate the plants appropriately [3]. However, this study does not irrigate the planted seed immediately after the seeding process is completed.

Sujon et al. [4] have proposed an autonomous prototype robot that will help farmers in the farmland. It is an Arduino controlled robot that carries out ploughing, sowing and watering process. The robot carries out farming using ultrasonic sensors in order to change its position from one farming strip to another. The robot aims contribute greatly in developing the farming strategies and reduce farmers cost [4]. However, this robot can carry out farming for land area of limited land area only.

Sunitha et al. [5] have proposed a robotic system that localizes the path and can navigate itself without human action. For ploughing, this robot is equipped with tentacles that has saw blades. The locomotion is provided with wheels covered under conveyor belts. For each rotation every tooth on gear will take seeds and will drop them on field. Camera at the front end tracks the path for every fixed distance and at the minimum distance it takes the path pre-programmed [5]. However, this study has a drawback where the system uses camera and image processing for object detection which makes the system complex. In addition, the object detection can be inaccurate if the image captured is subjected to motion blur due to the dirty camera lens and camera movement.

Thawali et al. [6] have proposed robot capable of performing operations like automatic ploughing, seed dispensing and pesticide spraying autonomously and provides manual control when required. Initially the robot digs the entire field simultaneously dispensing seeds side by side. On the field the robot operates on automated mode. For manual control the robot uses the remote controller as control device and helps in the navigation of the robot on the field [6]. However, there is no obstacle detection system and hence there are chances that this robot will runover planted plats if there is no human presence to deviate the robot from the predefined path.

Thorat Swapnil et al. [2] have proposed a sowing machine which is operated. This machine is capable of planting different types and different sizes of seeds and the spacing between two seeds can be varied. Seed storage tank is connected at the top of the robot near rear wheels. Front sensor serves the function of guiding the robot. As any obstacle comes in front of robot it gives the signal to the robot and diverts the path of robot [2]. However, the system does not monitor the soil or plant condition, hence the farmers still have to invest in systems that monitor those two variables.

The block diagram for the motion, seeding, irrigation, obstacle detection and avoidance is shown in Figure 1. The main control unit of this system is Arduino MEGA which is powered by a 9-V battery. Ultrasonic sensors fed input to the Arduino MEGA regarding the obstacle detection. Arduino MEGA will analyze the received inputs and control the output to the lifting servos. DC motors are powered by a 7.7-V Lithium Polymer battery; the motors are used for the movement of the robot. Arduino MEGA controls the motor direction and speed (RPM) using L298N module.

The block diagram for the soil moisture, humidity and temperature monitoring system is shown in Figure 2. Soil moisture and DHT 22 sensors provide input to the Arduino UNO regarding the soil moisture level, temperature and humidity of the surrounding, respectively. The input information from the sensors will be sent to the Android Application and SMS via GSM module.

Figure 3 shows the circuit diagram of Arduino DC motor control. Only three Arduino pins are required, pin 8 is for the push button which controls the direction of motor rotation. Pins 9 and 10 are Pulse Width Modulation (PWM) signal outputs, at a given time there is only one active PWM, this allows for the control of direction as well as the speed by varying the duty cycle of the PWM signal. The active PWM pin decides the motor direction of rotation (one at a time, the other output is logic 0). The speed of the DC motor (both directions) is controlled with the 10 kΩ potentiometer which is connected to analog channel 0 (A0). The L293D driver has two VCCs: VCC1 is +5 V and VCC2 is +12 V.

This subsection explains the seeding mechanism performed by the robot. The robot takes ten seconds to initialize. Upon initialization, robot moves forward for 2 s at the speed of 200 rpm and then comes to a halt to facilitate the seeding and irrigation process, respectively. Once the seeding and irrigation process is completed, the robot moves forward for two more times before it turns to the next row. The robot is programmed to drops the seed at an interval of 6 s and 7 cm. Figure 5 shows the seeding process of mung dhal. The robot is capable of preforming seeding of seeds with diameter up to 1.3 cm (13 mm), because the diameter of the seed funnel used in this prototype is 1.5 cm (15 mm).

Figure 6 shows that the robot performs irrigation after the seeding process. The water requirement for each crop is different. For example, water required for crops like mung dhal and peas is 20–25 ml water. Table 1 shows the irrigation details of the robot prototype.

The monitoring system is beneficial for the user, because it helps to keep track of the soil moisture, the surrounding environment and carry out on demand irrigation. It also helps the farmers to store the data for future weather prediction and planning on land management based on the data collected.

This subsection explains the lifting system to avoid obstacles while maneuvering and assist in irrigation. The robot is equipped with two ultrasonic sensors to detect obstacles at the front and base of the robot. When front ultrasonic sensor detects an obstacle at distance of 10 cm or less, the system stops and activates the lifting system to avoid the obstacles. When the system has fully lift upwards, the base ultrasonic sensor activates, and the robot continues to move forward. The base ultrasonic sensor is placed to bring the lifted system back to its original level if distance between the lifted system and ground is more than 20 cm and if there is no obstacle in the front. Figure 8 shows that the robot is lifted when there is an obstacle in front.

The robot is capable to run for about 4 km in a single battery charge.

The proposed system is capable to perform seeding followed by irrigation procedure. The robot is equipped with eight wheels to facilitate the movement of the robot. The robot is also equipped with two ultrasonic sensors of any obstacle at the front and base of the robot to detect obstacles in the front and under the robot. The robot lifts before moving forward when it detected obstacles in the front and comes back down with the assistance of the base ultrasonic sensor when the obstacle has been passed. This also enables the system to water the tall plants. Soil moisture and DHT22 sensors are fixed on the land to sense the soil moisture, humidity and temperature. The readings of these parameters are sent to the user via SMS every 1 min. In addition, the user can view the readings of the parameters via Android App. The robot moves forward once and perform the seeding at one point, irrigate the seed and moves to the next point for the seeding process. The robot dispenses seeds automatically at a fixed distance (7 cm). The robot can be further improved by using image processing and robotic arm for the weed removal. 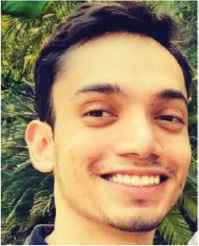 He received the Bachelor’s Degree in Electrical and Electronic Engineering in 2019 from Manipal International University, Malaysia. Currently, he is a Masters of Engineering Student at The University of Melbourne. His research interest includes digital electronics, embedded system and machine learning.