We describe the design and implementation of a modular and distributed robot that physically simulates functioning of a 2-symbols Turing machine. The robot is constructed with Cubelets (small autonomous robot-cubes used for teaching basic robotics and programming for kids) and Lego® bricks (thus the robot is called CULET). The Cubelets robotic blocks allow for a high level programming: instead of a traditional code, the robots are programmed by assembling various elementary blocks of robots together. We illustrate how read and write operations are physically implemented by the CULET.

In the history of Turing machines a large number of physical mechanical devices have been developed. For example, in 2012, to celebrate Turing’s 100th birthday, LEGO built an autonomous mechanical Turing machine adding binary numbers [1]. Being inspired by ideas of machines emerged from the theory of self-reproducing cellular automata [2], we decided to make a robot based in small robotic-cubes Cubelets and pieces Lego®. We called this robot CULET. A key feature of CULET is the first ever implementation of the machine constructed with robots and bricks. This robotic machine is capable for simulating the function of other machine. Cubelets, enhanced with pieces of Lego bricks, demonstrate how a robotic machine simulates an abstract computing machine. A distributed controller of the robot is in the cube which can implement operation read and other two cubes that move the head and the arm (which implements write operation). These cubes need to be re-programed for each table of transitions.

This is an extended version of a work presented at the International Conference on Artificial Life and Robotics (ICAROB), 2019 edition [4]. The subjects treated here and not in the original version are: (1) the exposition of a similar machine to CULET that is able to perform logic operations and (2) a clearer explanation of the operation of the robot.

The paper is structured as follows. In Section 2 we introduce the Cubelet robots and describe the Turing machines implemented. Section 3 describes the design. Section 4 describes the implementation of a robot that computes logic functions. We give some final remarks in Section 5.

The Cubelets are small cube-shaped robots designed to teach fundamentals of robotics and programming to kids. Cubes can have different functionality. An idea is to construct robots only through the concatenation of different cubes. This way Cubelets can be seen as a formal language, where every valid construction is a valid expression in the language, with virtually unlimited number of possible combinations. This can be interpreted as a high level of programming: a user does not modify the original program of each cube, but instead, uses this program together with the interaction among cubes to produce a new robot. There are three types of cubes [5]:

A single cube communicates with his neighbourhoods through a shared channel that is established in the concatenation of blocks. The input sensors-cubes distribute their readings thought the channels; the thinkers-cubes obtain these readings, process the information and make a decision, and send the commands to the actuators.

Also, each cube can be reprogrammed to re-assign its functionality. This reprogramming is done in C or Scratch-like code. CULET, which is described in the next section, follows this approach.

The Turing machines were proposed by Turing in 1936 [6] to solve problems about completeness and decidability. A Turing machine is a finite-state machine with an external memory medium, an infinite tape divided into squares. A head of the machine moves on the tape and reads the value in each square sequentially [7]. Formally, the Turing machine is a set of quintuples of the form [Equation (1)]:

where q is the set of states, s is the set of symbols and d indicates the direction of movement of the head in the tape (right or left); i is the time step. So, the first two elements of the quintuple indicate the current state and symbol, the next two elements indicate the following state and symbol, and the last one indicates the direction of movementa.

One of the greatest achievements of Turing’s work is the conceptualization of the so called universal machines. A universal machine U can do everything that any machine can do. U receives as input two things: a description of a machine A, and the input for that machine M. The machine U writes on the tape the same string of symbols that the machine A would write in its response to the input M.

Cellular automata were proposed by von Neumann [2] as means to study decentralized systems (which later led to designs of distributed computing, ironically called non-von-Neumann-style computers). The cellular automata consists of an array of cells, each of which is a finite-state automaton (the same rules for all the cells) and where the state of each cell in the next generation depends on its current neighbourhood. Von Neumann developed a very complex automaton with 29 states evolving in two dimensions.

Another important event in cellular automata history is the popularization of Conway’s Game of Life in the 70’s [9]. This is a cellular automaton with only two states and a neighbourhood of eight cells (Moore neighbourhood). The automaton is popular because it shows how a complex and unpredictable behaviour emerges from simple rules. Berlekamp et al. [10] demonstrated the universality of this automata by constructing a register machine.

In the 1980’s years, Wolfram [11] described the elementary cellular automata to understand and formalise the dynamics of cellular automata. The space is one-dimensional (a row of cells) and a cell’s neighbourhood is two closest cell-neighbours of the cell. Wolfram hypothesis was that if we cannot understand such minimal models, then we could never understand bigger ones. The interesting part comes when even in those apparently simple automata there are intriguing patterns of a behaviour.

A duplicator Turing machine was used by Rendell [17] as a part of the Turing machine constructed in the Game of Life cellular automaton. We implement this machine in CULET. In Figure 1b, we show a 3-symbols version: it starts advancing to the right, for each one scanned, it put another one in the left until there is no more ones to the right. For the implementation in the CULET we used a 2-symbols version of this machine.

In Figure 2 we show a snapshot of CULET. The tape is represented by an array of Lego blocks on rectangles of a black paper; the position of the block (front or back) indicates the symbol in the cell (0 or 1, respectively). The Cubelet car moves through the tape reading and writing in the tape; the read operation is achieved with a distance sensor that tests the position of the Lego block under scanning; the writing is done with a lever made of Lego and a rotate cube: depending on the desired symbol, the lever pushes or pulls the block of the tape. The movement across the tape is done with a couple of wheels that move in right or left direction. In the backwards of the car is attached a rail that helps to maintain the alignment of the car with respect to the tape.

The rotator cube plays the role of controller: it reads the values of the distance sensors, move the Lego leaver and instruct the wheels when to move and in which direction. This controller encodes the transition rules of the Turing machine being simulated. The controller program starts reading the current symbol on the tape. Depending on the value scanned, it determines if a writing operation is needed, and if is the case, it performs it. After that, the controller instructs the motor on the new direction to move, left or right, depending on the automata rules. The car moves until it reaches a new cell and then the cycle of operations is repeated.

Previous to the development of CULET was some others models with similar capabilities. One of the most successful was a Cubelets-only car that were able to perform logic operations. CULET: Cubelets Lego Universal Turing Machine ECA Rule 110 [19] shows a video with some examples.

Figure 3 shows a photograph of this robot. The fundamental idea is the same that the one for CULET: a car that moves through a tape of cell and that is able to read and write in it. Here the tape is made of cubes: each cell is formed by a sensor distance and a flashlight; each time that the sensor detects a movement, the state of the flashlight (on or off) swaps. The car uses a rotator block to position the brightness sensor on top of the tape; the read operation is performed by moving the sensor on top of a flashlight; the write operation is done by moving the sensor on top of a distance sensor of the tape. The main inconveniences of this model are the following. First is the issue of the price: the bigger the program, the bigger the tape; CULET uses cheaper cell components than the logic gates machine. Second is the point of the coordination and calibration of the components: this model depends on delays for make a movement along the tape and to move the brightness sensor. 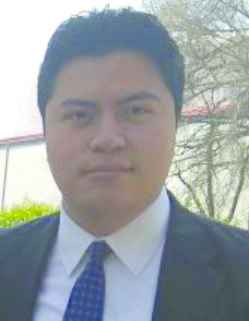 Daniel A. Zamorano is a researcher at the Artificial Life Robotics Lab in the Superior School of Computer Sciences, National Polytechnic Institute, Mexico City, Mexico. Currently, his areas or work are cellular automata, complex systems, system security and artificial intelligence. Genaro J. Martínez is a professor at the School of Computer Sciences, National Polytechnic Institute, Mexico City, Mexico and visiting fellow at the Unconventional Computing Centre, University of the West of England, Bristol, UK. His does research in cellular automata, unconventional computing, artificial life, complex systems, and swarm robotics.

Andrew Adamatzky is a professor at the Department of Computer Science and Director of the Unconventional Computing Centre, University of the West of England, Bristol, UK. He does research in reaction-diffusion computing, cellular automata, massive parallel computation, collective intelligence, bionics, complexity, non-linear science, novel hardware.