A Mathematical Model of Tritrophic Systems

Lotoka–Volterra, LV equations are to model predator–prey problem. In principle, the LV equations are belongs to a two-person system. Even if there are many-body, it is structurally in two-body, i.e., with three or more predators and a prey. On the other hand, chemical ecology has shown that plants damaged by predation produce information chemicals (Hervibore Induced Plant Volatile, HIPV) that attract natural enemies. Chemical ecology suggests that the ecosystem is a tri-trophic system consisting of predator–plant (HIPV)–prey. Therefore, chemical ecosystems are essentially different from LV equations. This paper proposes a basic equation for tri-trophic systems and investigates their stability.

Mathematical ecology has used the Lotoka–Volterra, i.e., LV equations which are the basic equation of the theory [1]. LV equations are differential equations with the predator as y and the prey as x, shown in Equations (1) and (2).

The equilibrium point of the LV equation can be found as the point where the derivative of x and y is zero; as shown in Equations (3) and (4);

We obtain the equilibrium points,

The positive and negative differential values of x or y around equilibrium points give the behavior of the LV equations.

If y is more significant than k1/k2, x decreases, and if y is minor, it increases. On the other hand, if x is more prominent than k3/k2, y increases, and if it is smaller, y decreases. Therefore, x and y oscillate around the equilibrium point; the solution to these equations are periodic (Figure 1) [1].

The group dynamics governing the elements can exist in a variety of forms. Among them, there are mutually independent dynamical rules that are fundamental. These basic dynamics rules are called rules, and the motion in the rule space is called rule dynamics [2]. In this paper, a rule rewrites a multiset of the alphabet; we denote a set of alphabets as AL. A multiset, Ms, is defined by a set and a pair of sup functions, <Ms, Sup>, where Sup is a function from the elements of the multiset to a natural number, including zero. For example, SupMs(a) gives the number of occurrences of an in Ms SupMs(a) = two means that Ms contains two a’s, while supMs(a) = 0 means that Ms contains zero a’s. We denote a multiset explicitly as {a, a, b, b, b} = Msi; SupMsi(a) = 2, SupMSi(b) = 3 and SupMSi(c) = 0. A multiset rewriting rule is defined by a pair of multisets, <{l}, {r}>. If Ms, then the intersection of Ms and l is rewritten to r. If {l} ⊆ Ms then {l} is deleted and into {r} is included. For example, the set of rules of rule dynamical expression of LV equations are as follows:

The tri-trophic system in chemical ecology is composed of plants, herbivores, carnivores and HIPV; in the system, plants grow, and if a herbivore eats a plant, the plant generates HIPV, and the herbivore grows; if there is HIPV and herbivores, a carnivore will be attracted and get carnivores to increase population, and the plant stopped generating HIPV. In this scenario, we ignore the increasing population of herbivores and carnivores as the LV equations also ignore the process.

We will denote herbivore as h, carnivores as c and HIPV as d. Based on the scenario, a set of rules of a dynamical expression of the tri-trophic system are as follows.

3. EQUATION OF THE TRI-TROPHIC SYSTEM

The LV equations cannot describe the tri-trophic chemical ecosystem conventionally. LV equations with multi-bodies have been proposed in Dimas Martins [5]. The n species is essentially in a biotrophic system [6–9]. And Sabelis et al. [10] proposed mathematical models of tritrophic system with modified LV equations and game theory in two-species.

Since it is composed of multiple herbivores or carnivores, it can have many bodies interactions between biotrophic layers and cannot have interactions beyond these layers. Therefore, the generalized LV equations cannot essentially describe the chemical ecosystem.

We regard the dynamical rule system as a jump Markov process, where every rule is a transition rule; we obtain transition rules of the procedure as r1:p→p,pr2:h,p→h,h,vr3:c,h,v→c,cr4:c→Null, respectively.

We give transition probabilities as

Note that this equation is a three bodies LV equation if we ignore v.

3.2. The Behavior of Basic Equations of Chemical Ecosystems

To investigate the behaviors of the model, Equation (13) was embedded in Equation (14) to make it an approximate equations;

We proposed the equation of three species interactions. We showed that the equilibrium points of this equation are x and y at infinite points including 0. Note that we are considering a positive number including 0, because it is a model of an ecosystem. 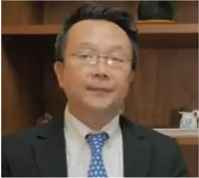